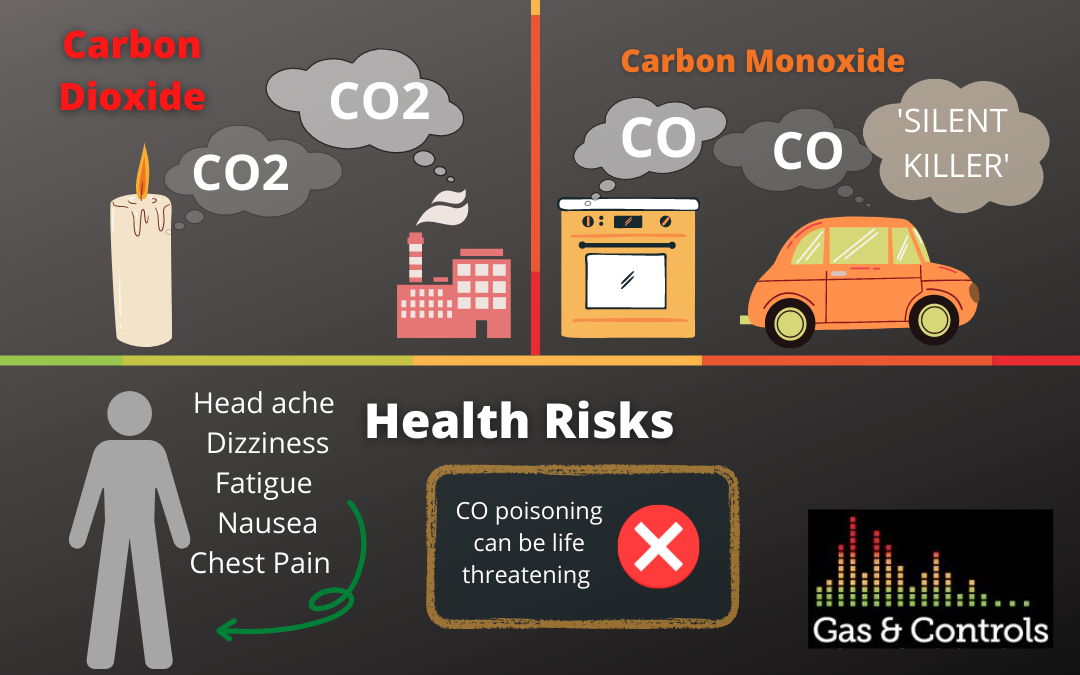 Many people confuse carbon monoxide and carbon dioxide. Let’s explore a basic explanation of each gas before understanding where each gas affects people, and the environment and how to test for each. Both gases have similar names as they are both a combination of carbon and oxygen, however, they are created through different chemical reactions.

Where does Carbon Dioxide come from?

Industrial plants which produce hydrogen or ammonia from natural gas, coal or large-volume fermentation operations are amongst the largest commercial producers of carbon dioxide. As well as industrial process, carbon dioxide also has many applications within the food and beverage industry.

Where does Carbon Monoxide come from?

Carbon Monoxide, unlike Carbon Dioxide does not occur naturally in the atmosphere. Carbon Monoxide is created through the incomplete combustion of coal, natural gas, and oil. Low levels of oxygen and low temperatures lead to carbon monoxide in the combustion mixture.

The internal combustion engine is the main source of carbon monoxide within industrial settings. Workers in areas of confined or enclosed spaces such as garages, tunnels, loading docks, manholes, vehicle repair shops and warehouse are also at high risk.  Large amounts of Carbon Monoxide are produced from furnaces and ovens, especially when not maintained properly. Workers working near trucks, forklifts and other type of equipment are also at higher risk.

High concentration in a confined space can be toxic, however carbon dioxide is poisoning is rare. Carbon Dioxide creates an environment for asphyxiation through using up the space in the air instead of oxygen. At low concentration levels of less than 30,000 PPM mild carbon dioxide poisoning can cause headaches, dizziness, fatigue and nausea. Carbon Dioxide can become life-threatening at 80,000 ppm. CO2 has a permissible exposure limit (PEL) of 5.000 PPM over an eight hour time period and 30,000 PPM over a 10-minute time period, as set by Occupational Safety and Health Administration (OSHA).

Carbon Monoxide, often referred to as the ‘Silent Killer’ is far more dangerous. CO is a colourless, odourless, tasteless, non-irritable gas, deeming early signs of poisoning extremely difficult to detect. Carbon Monoxide binds to the parts of your blood which carries oxygen molecules, chemically blocking your body and organs from getting oxygen it vitally needs. This is why Carbon Monoxide is so dangerous. Exposure levels considered immediately dangerous to life and health is 1500 PPM and OSHA identifies the permissible exposure limit as 50 PPM over an eight hour period.

It is very important to remember when choosing an industrial gas detector for the workplace that a single-gas carbon monoxide detector will not measure carbon dioxide, and vice versa. The sensors within each single gas detector are specific to each gas. There are multiple options when choosing the best gas detector for monitoring both carbon monoxide and/ or carbon dioxide, including personal single-gas monitors, multi-gas monitors and area monitors. When choosing the correct instrument it is vital the environment and properties of the gas or gases going to be monitored are explored.