Dangers behind your favourite beverage 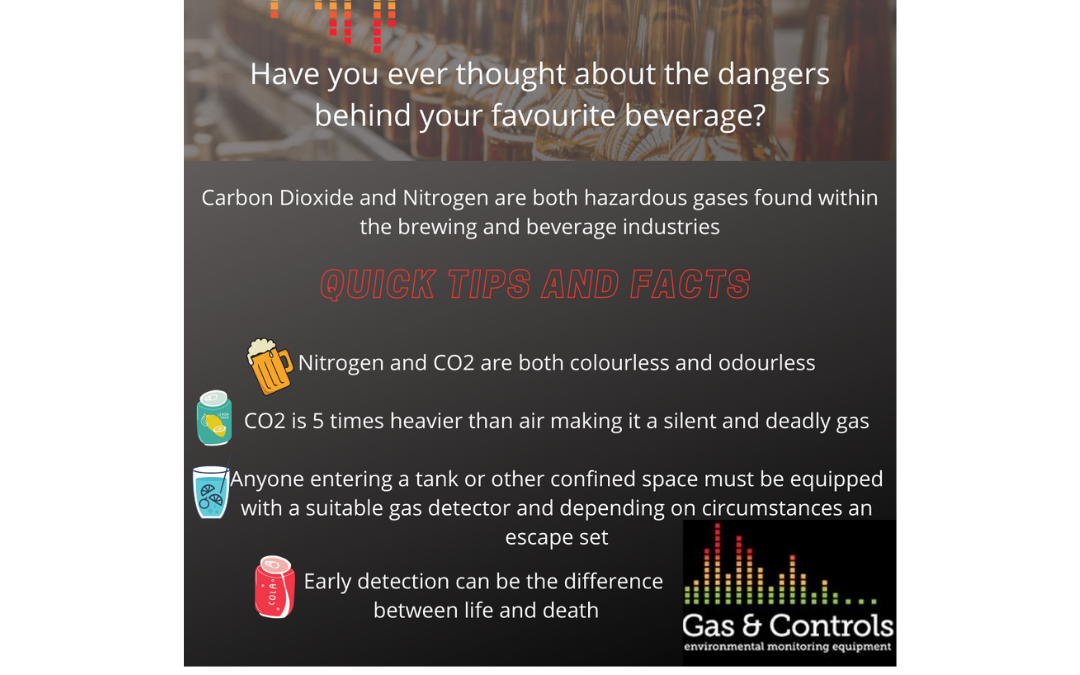 Have you ever through about the dangers behind your favourite beverage? When talking about gas detection you may associate industries such as steel, oil and gas companies. But would you think of the brewing and beverage industry? Carbon dioxide and Nitrogen are two of the hazardous gases found within these industries which most people never think about.

CO2 is sometimes overlooked as a hazardous gas. Carbon Dioxide remains at a low concentration within the atmosphere at about 400 PPM (parts per million), however more care should be focused towards brewery and cellar environments which hold many confined spaces. Within these confined spaces there are risks gas canisters or associated equipment may leak leading to elevated levels. CO2 is a toxic health hazard at as low as 0.5% volume (5000PPM).

Carbon Dioxide is a colourless, odourless gas with a heavier density than air meaning it gathers in invisible pockets on the ground which gradually largen. Fermentation generates large amounts of CO2 and poses a risk in confined spaces including vats, cellars or cylinder storage areas which can be fatal to workers. Health and Safety managers must ensure the correct equipment, as well as correct gas detectors are in place.

Nitrogen is used by brewers to put bubbles into beer during various stages of the brewing and dispensing process. Nitrogen is particularly used in stouts, pale ales and porters, it also ensures the beer doesn’t oxide or pollute the next batch with harsh flavours. Nitrogen assists in pushing liquid from one tank to another, as well as offering the potential to be injected into kegs or barrels pressurising them ready for storage and shipment. Nitrogen is not toxic but it does displace the oxygen within the atmosphere if there is a gas leak which is extremely dangerous, highlighting the importance of gas detection.

There are both fixed and portable gas detection devices. For a larger space such as plant rooms a fixed gas detector is more beneficial as it provides continuous area and staff protection 24 hours a day. A portable detector is more suitable for worker safety in and around cylinder storage area and in confined spaces. Delivery drivers, sales teams or equipment technicians should use portable gas detection devices as they are unfamiliar with the environment at various pubs and beverage dispensing outlets. Portable units can easily be clipped within breathing areas to detect pockets of CO2 which will use alarms and visual signals to indicate the user should vacate the area immediately.

Early detection can be the difference between life and death. At Gas and Controls we have an abundance of devices suitable to a range of environments to ensure your safety, browse our online shop, or contact our team today to make an enquiry or purchase.